During the regular course we make collective proposals with our children that are exposed in Traç Expo room.

This year we started the cycle with the Drawing and painting Workshop.

The expositional proposal of the drawing and painting workshop has been proposed as cooperative work in which the sum of the small interventions of each pupil, on the same support, gives rise to a large-scale collective work.

This is an exercise in adapting, coordinating and collectivising all students, without losing the sense of individual responsibility for what we are creating together.

The assembly is performed on the walls of the exhibition room, as if it were a large envoyant scaffolder, which will be evolutionary day by day, with the contributions of each group. Each pupil will intervene on this large support, placing previously painted papers in class, in the place he believes conve nient, taking into account important aspects such as: the position, the vacuum, and the full weight of matter, the balance of the coconuts

This final creative act is the core of a previous job done in class: we have viewed the work of various artists such as Sabine Finkenauer, Anna Mac and Jo Hummel, to understand and interpour their proposals; we have made small builds on the wall or on the table to practice all these aspects on a small scale…

The final result is not predictable, and this makes it very interesting, as some scientific studies say: the larger the number of members of a collective working together, the more interesting and the more successful the result is.

Professor at the Drawing and Painting Workshop: 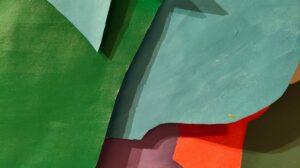 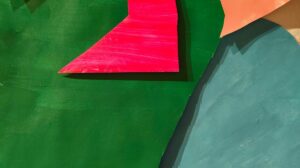 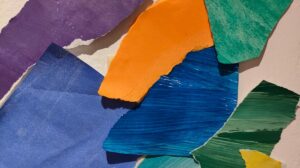 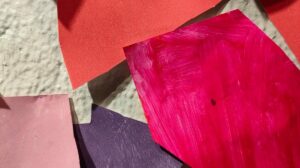